At the beginning of 2017, Comfort Heat, together with Enefit Solutions’ subsidiary of Enefit, which specializes in industrial projects, launched a project for the transportation of volatile liquids from production to the tanks with a total pipe length of 3185 meters. The Long Line heating cable technology, chosen by Comfort Heat was perfectly suited to implement the technical requirements of this project, facilitating operating conditions at high altitudes. In December 2017, the Long Line heating cable project was successfully implemented and the installation of pipe and tank heating cables at the Enefit 280 shale oil plant in Narva, Estonia was completed.

Eesti Energia, internationally known as Enefit, is one of the biggest producers of renewable energy in the Baltics. Enefit is the world’s biggest producer of energy from oil shale. The sole shareholder is the Republic of Estonia. Eurobonds listed on the London Stock Exchange. 2.4 billion euros were invested in oil shale production over the past 10 years.

Enefit has been producing oil from oil shale since 1980 using the solid heat carrier technology. Its current capacity is near 3 million barrels per year. The oil shale industry contributes 4–5% of the Estonian GDP and contributes 300 million euros annually to the state budget. 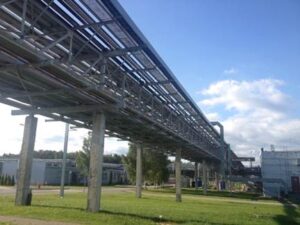 The construction of the Vilnius cogeneration power plant (VKJ) will be opened soon. Comfort Heat heating cables were installed to protect the power plant’s technological . . .

The first meeting of the Investment Committee for the Implementation of the DNA Plan for the Future Economy took place on July 17. The Ministry . . .